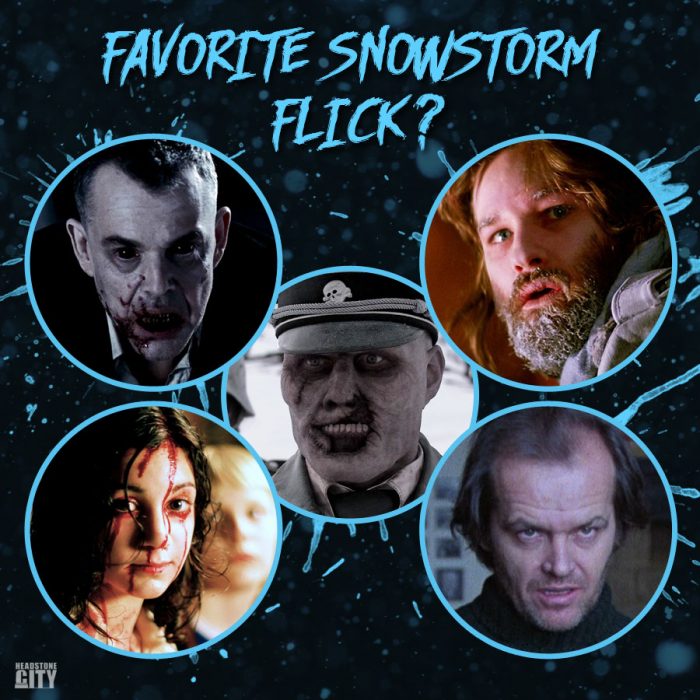 If you’re stuck indoors today or any other time, what’s your go-to snow-filled fright-flick? In “30 Days of Night”, there are vampires hiding from the sun in Alaska. “The Thing” is trying to assimilate organisms in Antarctica. In “Dead Snow” you’ve got your Nazi zombies but this time they’re in the snowy mountains of Norway. Next is “Let the Right One In”, another vampire tale about friendship set in Sweden. Finally we have Kubrick’s classic of Stephen King’s “The Shining”, about a family snowed in at the Overlook Hotel in the Colorado Rockies. Which one would you pick to pass the time on a snowy winter day? Or is there another flick that’s not on our list? Let us know! Our new VHS Horror tee was inspired by long strolls up and down the aisles of your local Video Store. This was a time of the 1980’s when DVD’s were not on the shelves. Blockbuster was not a thing. A time when cover art was actually painted and not photoshopped. A time when traditional makeup effects ruled and CGI was non-existent. Well, Headstone City has brought back that time. So fire up that VCR and get your VHS Horror tee on because it’s about to get bloody! Exclusively at HeadstoneCity.com Our new “Rated H for Horror” tee is now available for pre-order. Show your love of horror with this new rating of your favorite genre! Shirts will ship after January 28th. Hit up Headstone City for your new tee! New from Headstone City! Step up your #pingame with this awesome Horror pin! $7 each. Each pin is 1.25 in. and has a double post. Great for stocking stuffers or just for fun! Pins will ship early to mid December, just in time for the horrordays. Limited edition, so order one today! They won’t be around forever! Headstone City is proud to present our latest batch of horror shirts. A couple of these shirts debuted at this year’s Fangoria convention in NYC and some of you might have even picked a few up. For the rest of you, here’s your chance to be part of the in crowd. Gravedigger’s Local 552:
(n) Based in North Carolina, Local 552 was first formed in 1826. Originally consisting of 5 members, the union has reached over 50 members throughout the 19th and 20th century. Gravedigger’s Local 552 is responsible for all graves that are dug in and around Kill Devil Hills. In 1926, Local 552 celebrated its centennial. To mark the occasion, the members held an anniversary party at the first cemetery the union first dug, back in 1826. The members drew straws and whoever drew the short straw would spend the night in the cemetery alone. Henry Walker was the unlucky winner and slept on the grave that was first dug 100 years prior. The following morning, the other members arrived at the cemetery and found no sign of their friend. Instead, Henry Walker’s name was carved on the tombstone and Henry was never seen or heard from again. There have been claims that Henry’s ghost still haunts the local cemetery and you can hear him laughing among the tombstones. Headstone City Cleaver:
(n) This is the hand of the guy who would not shut up on the plane ride to Transylvania last year. After severing his hand from his wrist, I noticed the blood splatter on the knife had formed writing. With a closer inspection I could see it said “Headstone City”. Thus, the name of the t-shirt company was born. Your Name Here:
(n) If you’re gonna go out, go out in style. Get a tombstone inscription that people will never forget. They’ll come from miles around the globe to see your witty personality…even if you are buried 6 feet beneath the earth’s soil. Or you can always get cremated and waste a perfectly good joke.

Hey fright fans!!! We have some new designs on the way! I hope your as pumped as us and I’m sure you know how much we love to keep you in anticipation. Therefore, we will not reveal the designs just yet. I know, I know, we’re jerks. Go ahead and send in the hate mail, we can take it. But don’t worry, the new threads will be here soon enough. Here’s a sneak peek at what’s to come: Due to an overwhelmingly positive response, the “Oculus Ciliaris” horror t-shirt will stay on sale at the super discounted price of only $10.00. But for how long? We have no idea. Maybe a day, maybe a day and a half. So order one quick, before it’s too late! The wait is over!! Headstone City has added 3 new horror t-shirt designs. We wanted to get the new designs out to you a lot sooner, but we ran into a few zombies along the way that impeded our campaign. In fact one of the shirts had debuted at the “Fangoria’s Weekend Of Horrors” convention in Secaucus NJ, way back in June. Because of a few delays we had to wait longer than anticipated. But what better time to release some new horror shirts then October? None! In fact we’re so excited about the greatest month of the year we’re slashing the price on one of our new designs. That’s right, “Oculus Ciliaris” t-shirt will be on sale for dirt cheap, until Halloween. So hurry and snatch one these bad boys at a kick-ass price! Oculus Ciliaris (n): Humanoid creatures from the deepest regions of space. They are indigenous to the planet “Zonule of Zinn”. This world is located somewhere in the “Eyes Galaxies”, about 52 million light-years away in the constellation Virgo. The Oculus Ciliaris species are very interesting creatures and are similar to humans with one noticeable exception – a giant eyeball perched on their neck. Cigarette Jones (n): Jack “Cigarette” Jones was an American gangster in NY City during the early 1920’s. He was known around town as “Cigarette” since he smoked 3 packs a day. At a very young age, Jones controlled his own criminal crew. Based in Manhattan, the crew only lasted from 1921-1925. In 1925, Jones was arrested and indicted for operating an illegal alcohol still and sentenced to 15 years. After serving 2 years, Jones and 2 inmates managed to escape the prison. While stealing guns and killing 5 prison guards, the trio made it past the inner guard towers. They eventually made it to the prison gate, but by that time, every available guard had them cornered. The bloodbath only lasted 15 minutes before all 3 inmates were killed. “Cigarette” Jones had been shot 18 times and was pronounced dead at the age of 28. TV Casualty (n): An unknown evil force, which appears at random on television screens, causing insanity to those who witness it. This entity manifests itself as a human skull for reasons unknown. Once declared unsafe to themselves and the public, the victims(s) are put into psychiatric hospitals.  For some reason, patients begin drawing the “TV Casualty” image on anything they can. Many paint the image, others engrave it into walls and some have even carved into their own flesh. I Brake For Zombies – Sticker: Let the world know that you are an advocate for zombies. When the dead take over the planet, they will pardon you because of your good willed nature toward their cannibalistic tendencies. Show your zombie pride and befriend the ranks of the undead.

Since our inception into t-shirt printing, we have received many requests for stickers. So when we set out to make a sticker, we wanted something striking and something you haven’t seen before. Actually, our lead designer thought of the idea while driving in his car. He thought, “We need a sticker design that really shows who you are, what you’re about. Simplistic, yet thought-provoking. Sparse, yet eye-catching. Mysterious, yet comically-advancing.” You get the point. So order a sticker and slap it on your car before the zombies turn our planet into a world-wide-war-zone. *BONUS: Buy 2 or more t-shirts and get 1 or more stickers FREE!

Here at Headstone City, we are always working on new horror t-shirt designs. But we’d like you guys to know when new shirts are on their way. In order to keep you in the mix, we’ll give you a head’s up about upcoming designs. Since we like to keep you in suspense, we won’t show the entire design. You’ll just have to wait a few more weeks for the whole thing. Enjoy.